There’s something wrong with anybody who has TDS. It’s like they’ve lost all ability to make good decisions, and are just on a collision course with life, putting their reputations and careers on the line, simply because they have an irrational and mentally unstable fixation on all things “Trump.” We’ve seen this pattern unfold with countless people over time, and even though President Trump was “removed” from the White House, the Stage 5 TDS rages on within these losers, and they’re still doing absolutely insane things.

Take, for example, the TDS lunatic and shameless RINO Adam Kinzinger, who opted not to run for his House seat, because he didn’t want to be humiliated and beaten in a primary like Liz Cheney was. So, thanks to TDS, this idiot has no job left. But he’s going out in complete “mental illness style.”

In a now-deleted tweet, a sitting US Congressman actually threatened a United States citizen with violence over a silly meme.

The meme is supposed to be a liberal person who is crying and peeing themselves in the shape and colors of the Ukraine flag. The tears are blue, and pee is yellow — you get the picture. It’s a mockery of how these over-dramatic liberals have taken all things “Ukraine” and turned it into yet another “religion.” The Ukraine obsession has replaced COVID for many of these people.

So, Adam responded to Catturd’s meme tweet and threatened him with violence, saying, “Literal evil. If I met you in person it would not end well…for you. Sicko. Trolls who have never done a thing in their life pretend to be patriots and laugh at real warriors.”

Wow. I don’t know what’s more shocking, the fact that Adam threatened a US citizen, or that he thinks he’s an actual “warrior.”

Needless to say, Adam deleted this unhinged tweet, but the internet is forever.

Here’s Catturd’s response to Adam’s threat: “Sitting congressman threatens violence against a U.S. citizen over laughing at a meme they found funny.😂 I can’t stop laughing at this infant.” 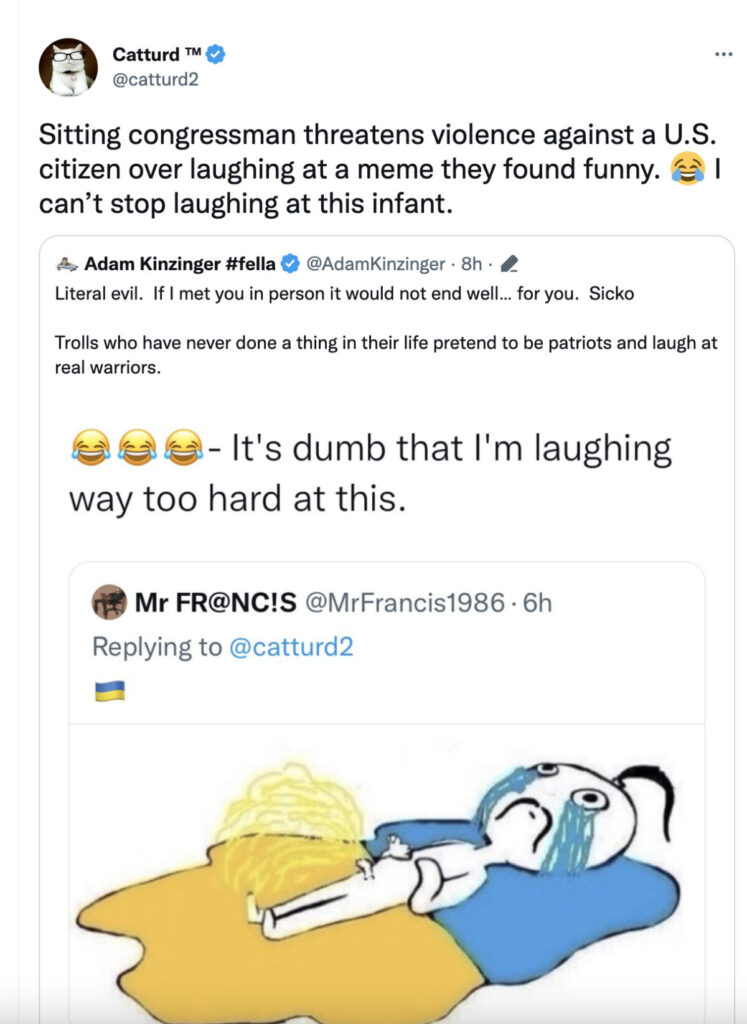 Here’s what people online are saying about this:

“Little Adam is so upset because he saw himself in that meme. And the crybaby decides to threaten a Cat with glasses. That pretty much defines this infants embarrassing political career.”

“He cried over Jan 6. but not over the American veteran that was shot to death.”

“He’s such an epic failure. Reminds me of Swallwell.”

“Good Lord! It’s such a tame meme compared to some of the stuff on here! He should see the stuff I laugh at!”

“This dude is in full meltdown mode”

“Oohhh ..something tells me, this meme will be haunting him with every tweet he posts from now on.”

“Overreaction of the year”

“I mean, I support Ukraine too but that is a really funny cartoon.”

“The meme is actually making fun of people exactly like Adam”

This should be enough to make Kinzinger resign from his post immediately. Jumping online, and using your power to attack everyday people for mocking you, is a perfect example of communism in action. 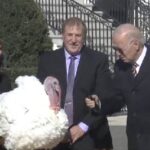 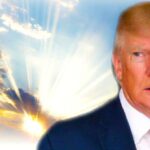