Something glorious is happening on Twitter. As you know by now, Elon Musk has taken over and he’s firing so many “woke” people. Twitter’s former CEO got the boot, and so did the “minister of truth” who installed so many of the “wokest” policies. But as awesome as all of that is, that’s not even the best news I have for you. So, it turns out that all of these so-called wildly popular left-wing “resist” accounts have just been exposed as complete and total frauds. All that amazing engagement they were getting for years now, was fake. Because now, the Dem bots have been turned off, and they’re suddenly left with hardly any engagement.

These so-called “high-level influencers” would instantly get tens of thousands of likes, and retweets, as if they were so popular, and everyone agreed with them. Well, now that whole song and dance are being exposed as a major fraud.

Twitter’s operation to prop up left-wing ‘influencers’ is starting to get exposed. 👀 pic.twitter.com/zO7MsvHVrC

Here’s a closeup of the real likes and retweets these TDS “resisters” have been really getting: 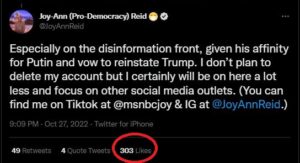 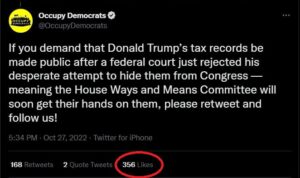 And they even exposed Joe Biden. From 46K “likes” to 4K? LOL wow. What a fall from grace.

Maybe all his online supporters left and are hanging out with his 81 million voters in some vortex, somewhere? 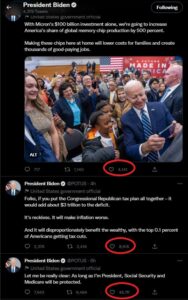 This is the likely reason — Twitter engineers haven’t been able to make changes to code, and I am sure they’ve been restricted from other things as well. Clearly, within the changes happening, the Dem bot machines have been cut off. We know from the negotiations to buy Twitter, “bots” were a huge issue, especially for Elon, who said the site was crawling with them.

Of course, I’d see it all the time. Most “people” who supported Biden had accounts with 1 or 2 followers. You could tell his engagement was fake and his defenders weren’t real.

Twitter’s engineers reportedly could no longer make changes to code as of noon today, per Bloomberg.

Here’s what people online are saying:

“Their fake engagements are gone!”

“These engagement numbers were as fake as Joe’s 81 million”

“The entire Democrat political party is one big psyop”

“WOW. I knew they were manufactured, but not to that extent. Hell”

“Looks like the left were the “small fringe minority” after all!”

“I want to know how it happened so fast, it implies there’s a well known system or database of “acceptable bots” that got turned off.”

“Elon cut the twitter engineers’ access off, that’s why this is happening. They can’t get into the code”

“The new claim will be that Elon is suppressing their numbers. LOL”

“Watch their followers. One huge left-wing influencer just lost thousands in the past few hours.”

“The complete lack of “BrooklynDad_Defiant”. He hasn’t shown up in my feed all day either, and they were always shoving him in there”

“Good. Now they can easily be exposed as frauds when they try to push outlandish crap.”

“Yup. We all knew it. Now confirmed.”

“This was the main thing they were worried about over everything else. Not the speech part (although censoring is an advantage) but they were mostly afraid of being exposed to how unpopular they actually are. They are not the majority of the country.”

“Imagine what the numbers would be without the constant gaslighting of the MSM, “celebs”, brainwashing centers passing as higher learning institutions etc…”

“This is just too good to be true”

“Twitter has turned off the Democrats bot machine. They’re all about to get exposed. No more fake engagement.”

There is nothing the elites hate more than being exposed and then mocked. They can handle anything, being called communists, demons, hypocrites, who cares? But when you mock them and expose them as frauds, all bets are off. They melt.

So keep that up. Keep exposing and mocking them, because they are the fringe. There isn’t an army of them. They are a small voice, being propped up by smoke and mirrors.