It takes a really evil, power-hungry wife, to put their mentally sick husband on the world’s stage, and stand back while he makes a complete and total buffoon of himself. But that’s exactly who Jill Biden is. While she plays “president” behind the scenes, her bungling, confused husband is shuffling and wandering around the country, making a fool of himself, and causing deep anxiety for the majority of Americans.

Poll after poll shows that the American people do not believe that Joe Biden is mentally fit for the job, and he’s getting worse every day. This recent article from Fox News says there’s been a Biden blunder a day for the past few weeks. Fox News and other mainstream media outlets call them “gaffes.”

” Biden averaged nearly a gaffe per workday over the past four weeks, errors that included mispronunciations, confusion, inaccuracies, and forgetting that a congresswoman had died.
Biden is hitting .810 from September 26 to October 24, committing at least 17 gaffes.

The president mostly fails to get on base over the long weekends when he often travels to his home state of Delaware and is generally kept away from microphones and cameras. One exception was his iconic bike fall in Rehoboth Beach, but that was back in June. He spent eight days in Delaware over the four-week stretch. It wouldn’t be fair to count those days toward his average, since he usually doesn’t get a chance at bat.
Biden, as he wished a happy birthday to Vice President Kamala Harris Monday, called her a “great president.” He later called Harris the “highest ranking black Indian, with Indian background, woman, in American history to be Vice President.” That same day, Biden botched United Kingdom Prime Minister Rishi Sunak’s name. One day prior, NowThis posted an interview with the president where he falsely described his executive order on college debt forgiveness as a bill that “passed by a vote or two.”

Radar Online is reporting exclusively that Joe Biden’s bossy wife Jill is playing “puppet master” behind the scenes at the White House and has taken a more commanding role in his administration as his cognitive abilities continue to decline, RadarOnline.com has learned.

“Jill’s always been totally protective of Joe since the earliest days of his presidency helping to vet White House staffers before they’re hired and lending advice and counsel when it’s needed,” said one political insider.

“But lately she’s obviously been running the show with her husband’s mental state in greater and greater question. Key presidential duties are falling to Jill, and she’s been stepping up and taking more on her plate. Sometimes, she even acts in her husband’s stead when it seems he is unable to!”

Political insiders claimed that in recent weeks, Jill has taken to the campaign trail to offer crucial political and fundraising assistance to Democratic midterm candidates in hotly contested races across the nation — appearing in situations where the president would normally be expected.

Recently, Jill stumped for Stacey Abrams for governor in Georgia, Charlie Crist for governor in Florida, and upstart Val Dennings, who’s facing off against Sen. Marco Rubio in the Sunshine State.

Sources said during one recent 27-hour period, Jill “hopscotched around the Southeast on five flights while making glittery appearances at 11 events!”

Sources said that the White House relying on Jill so heavily is an enormous gamble that could easily backfire, considering a recent poll showed almost 10 percent of Americans have never heard of her.

As RadarOnline.com has previously reported, Joe continues to make misstep after misstep while attempting to garner support from Americans who have given up hope, according to polls.

This really shouldn’t surprise anyone, should it? We always knew Jill was the #1 Handler. Now, I don’t think Jill is calling the shots, I believe that’s being done by Obama’s puppets, like Susan Rice, but it appears that she’s taken over the day-to-day operations since Joe is basically a “functioning dish rag.” 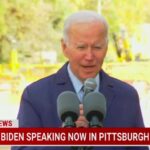